Before starting this tutorial, install Change-Point Analyzer on your computer.  This tutorial will walk you through the steps of using this software to analyze a simple data set.  We will be using the trade deficit data that appears in Donald Wheeler’s book: Understanding Variation – The Key to Managing Chaos.  Table 1 shows the US trade deficit each month for 1987 and 1988 in billions of dollars.

Start Change-Point Analyzer.  Your screen should appear as in Figure 1.  The blank Data window is used to enter the data. 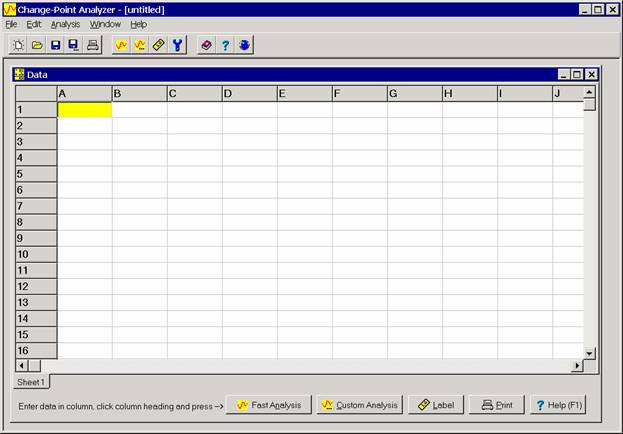 Step 2:  Enter the Data and Labels

The data is generally entered in columns.  You can also enter labels for the data points.  We will enter both labels and data as shown in Figure 2.  Start entering the labels by clicking on cell A1 (Column A and Row 1).  Cell A1 will be highlighted in yellow.  Type the word “Month” and press the Enter key twice.  This causes cell A3 to be highlighted.  Type the first label, “Jan ‘87”.  Continue typing the rest of the labels, pressing the Enter key after each label to move to the next cell.  Next enter the data.  Start by typing “Trade Deficit” into cell B1.  Use the scroll bars to move to this cell.  Move to cell B3 and start entering the data. 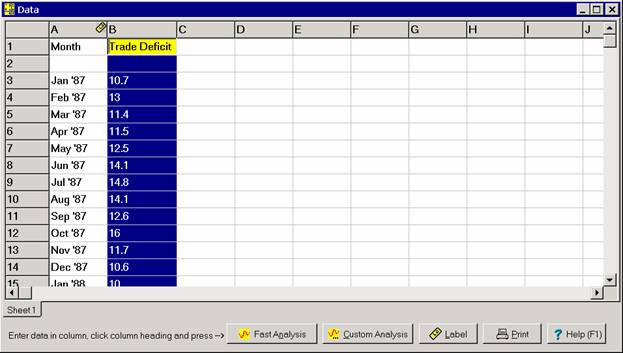 Once the data has been entered, you can print a copy of the data for your records by clicking on the Print button.  You can also paste data into the Data window using the clipboard.  This allows you to easily analyze data you have already entered elsewhere.  Change-Point Analyzer also comes with an Add-In for Excel that, once installed, allows you to initiate the analysis from within Excel.  Tutorial 3 describes how to use this Add-In.  The Trade Deficit data contains a single observation per time period.  Change-Point Analyzer can also handle datasets containing multiple observations per time period.  Tutorial 2 describes how to handle this type of data.

To select column A as labels, click the header for column A.   This will highlight the entire column.  Then click the Label button.  The label icon will appear in the column header indicating the column has been selected.  Labels are optional.  If no labels are specified, the row numbers are used as labels.

Before analyzing the data, you must first select the data you want to analyze.  To do this, click on the header for column B.  This will highlight the entire column.  Next, click the Fast Analysis button

at the bottom of the Data window.  Now sit back as the analysis is performed.

As the analysis proceeds, the Analysis Status dialog box shown in Figure 3 is displayed.  The purpose of this dialog box is to assure you that the analysis is progressing.  Don’t worry about understanding the status messages.  Anything of importance will be displayed in the Analysis Results window once the analysis is completed.  Analyses take from less than a second to several minutes depending on the speed of your machine and the amount of data you are analyzing.  For the trade deficit data, it should only take 1-2 seconds to complete the analysis.

Change-Point Analyzer automatically checks for outliers and a violation of assumptions.  If either is detected, a message appears describing the problem and recommending how to proceed.  A custom analysis is required.  Tutorial 4 describes the general procedure for performing custom analyses while Tutorials 5 and 6 describe how to handle outliers and a violation of assumptions.

The first tab shows a plot of the data (wavy black line).  It also summarizes the results of the change point analysis in blue.  The blue region shifts twice, once around June ‘87 and again around Nov ‘87.  This indicates that the change-point analysis detected two changes in the trade deficit data.  The second tab will provide further details.

Also shown are two red lines, which are control limits.  They represent the maximum range that the values are expected to vary over assuming no change has occurred.  Points outside the control limits indicate a change has occurred.    These control limits assume the values come from the normal distribution and may not be appropriate for all sets of data.  The fact that point 12 is above the upper control limit also indicates that some sort of change occurred.  Control charting is an alternative approach to detecting changes.  As we will see, a change-point analysis has many advantages over control charting and is the preferred approach when analyzing historical data.  However, Change-Point Analyzer also provides control charts of the data. 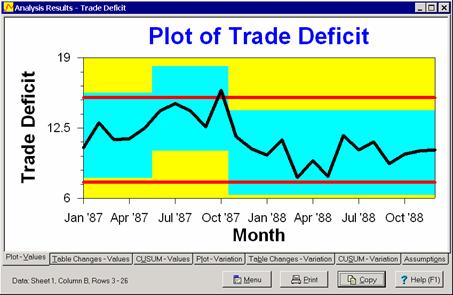 You can hide the control limits, not display the blue region, represent the data with points rather than a line, change the title, scale and colors and much more.  To do so, right-click the mouse over the plot.  You can also click the Menu button

.  This displays the popup menu in Figure 5 for making these changes.  The other tabs also have popup menus associated with them for customizing their display. 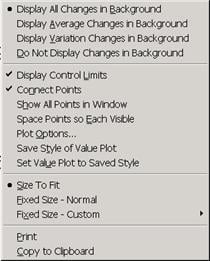 Take a minute to make some changes to your plot.  When you are done, you can print it by clicking the Print button

on the bottom of the Data Analysis window.  You can also copy the plot to the clipboard by clicking the Copy button

.  This allows you to paste the plot into your word processor using the Paste menu item on its Edit menu.

The second tab shows the results of the change-point analysis in table form (Figure 6).  Each change detected is listed along with further information describing the change.

Figure 4 represented these two changes by the shifts in the blue background.  The blue background represents a region expected to contain all the values based on the current model that two changes occurred.  Since all points fall within this region, this model fully explains the variation in the data.

The third tab shows a cumulative sum chart (CUSUM) of the data (Figure 7).  Change-Point Analyzer uses the CUSUM charts to identify the changes reported on Tab 2.  You can ignore these plots if you desire.  All the relevant results are given in Tab 2.

Applying these rules to the CUSUM in Figure 7, we see the trade deficit was above the overall average up to point 13 and thereafter was below the overall average.  Around Nov ‘87 there is a sudden change in direction indicating a change.  There is also an indication of a smaller change around June ‘87.  The changes in Tab 2 are represented by changes in the background color.  You can read more about CUSUM charts in the technical articles. 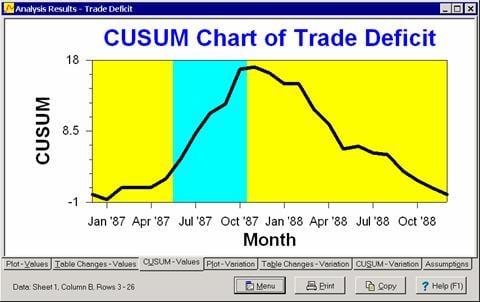 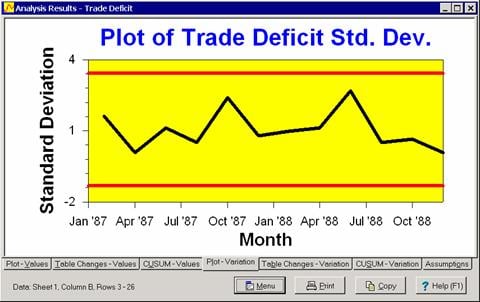 The fifth tab shows the table of variation changes (Figure 9).  It is interpreted similar to the table on Tab 2.  For the trade deficit data no changes in the variation were found, so the table is empty.

The sixth tab shows a CUSUM chart of the variation (Figure 10).  See Step 5.3 for information on interpreting a CUSUM chart.  Changes are shown by changes in the background color.  In this case, there are no color changes shown in the background, which indicates that the change-point analysis did not detect a change. 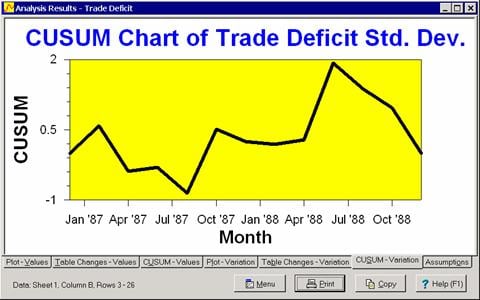 The seventh tab provides instructions on how to handle outliers or a violation of assumptions if they are detected (Figure 11).  In this case, neither was found.  Tutorials 5 and 6 show how to deal with these two complications.

This tutorial demonstrates two important advantages of a change-point analysis:

When analyzing historical data, a change-point analysis is superior to control charts.  However, the greatest advantage of a change-point analysis is its ease of use.  The same analysis can be used for all types of data including measurements, pass/fail data and counts.  No longer do you have to deal with a confusing array of control charts such as individual charts, p-charts, u-charts,  -R charts and more.  Just enter the data, select the column and click on the Fast Analysis button.  The program automatically checks for outliers and violation of assumptions and then displays the results in an easy to understand fashion.

The final 2 tutorials show you how to handle complications that can arise: Tutorial 5 deals with outliers and Tutorial 6 deals with a violation of assumptions.  Change-Point Analyzer detects and notifies you of either of these situations.  You don’t need to read the last 2 tutorials until you encounter one of these complications.